Banana blood disease (Blood Disease Bacteria, BDB) caused by Ralstonia solanacearum Phylotype IV is the most important  banana disease in Indonesia. So far, information on the spread of disease by insects is very limited. The research was aimed to determine the role of insect as a disseminator of R. solanacearum Phylotype IV and to determine the amount of BDB inoculum carried by each individual insect.  The experiment was conducted in May - September 2008. Samples of insects (adult insects, the young insects, larvae, eggs), nectar, and pollen were taken from a colony of Trigona spp. collected from BDB endemic area, Baso plateau (876 m asl) using purposive sampling method. Active adult insects were collected from the BDB infected banana flowers and healthy banana flowers. BDB on adult insects was isolated from the caput and abdomen, while for the young insects, larvae and pupae the isolation source were not differentiated. Each of the samples was rinsed, macerated, and cultured on medium containing Triphenyl Tetrazolium Chloride (TTC).  BDB isolate characterization and identification were conducted through morphological, physiological, and pathogenicity tests.  The parameter observed was the: population of BDB (cfu/ml) on each stage of insect development. The results showed that BDB can be isolated from the outside and the inside of the body of an adult, a young insect, pupa, larva also on pollen and nectar but it was not found in eggs.  BDB population was higher in inside part fo the insect body in each phase of the development of the insect. From all phases, the BDB was higher in inner part of the body of adult insects which have visited infected banana flower. 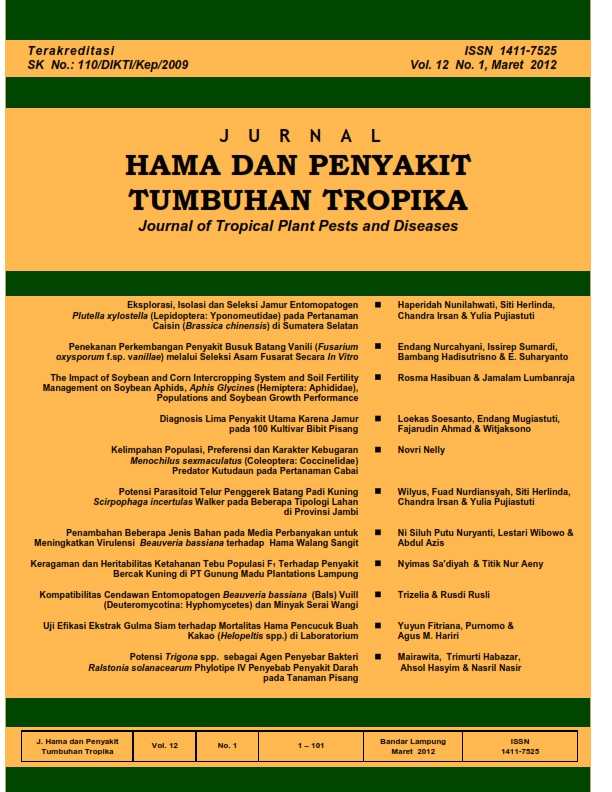