Pathogenicity of  Beauveria bassiana Bals. Vuill. (Deuteromycotina:Hyphomycetes) on various stages of eggs and nymphs of the green stink bug (Nezara viridula L.) . The green stink bug (Nezara viridula L.) is one of the important soybean pod-sucking bug besides brown stink bug (Riptortus linearis) and  green stink bug (Piezodorus hybneri). Up to now, pest control mostlyrely on the chemical insecticides,  The objectiveof this experiment was to study the pathogenicity of Beauveria bassianaon various stages of eggs and nymphs of the  green stink bug.  Experiment was conducted in the laboratory of Entomology, Indonesian Legumes and Tuber Crops Research Institute (ILETRI) Malang, from January to June 2011. The treatments consists of various eggs and nymphs stages of green stink bug. The results showed that B. bassiana was able to infect the eggs green stink bug both of the newly laid and the six days old eggs.   As a results of this infection, 96% eggs did not hatched.  The younger of eggs, the more susceptible to B. bassiana. The infected egg prolonged hatching periods to three days. B. bassianawas also toxic to all stages of  the green stink bug, especially to the first and second instarswith mortality  rate of 69-96%. The nymph of third, fourth, ad fifth instar and adult  stage were more tolerant to the B. bassiana infection. This study suggest that one way to control green stink bug be  the use of entomopathogen B. bassiana againts their ggs or younginstar. 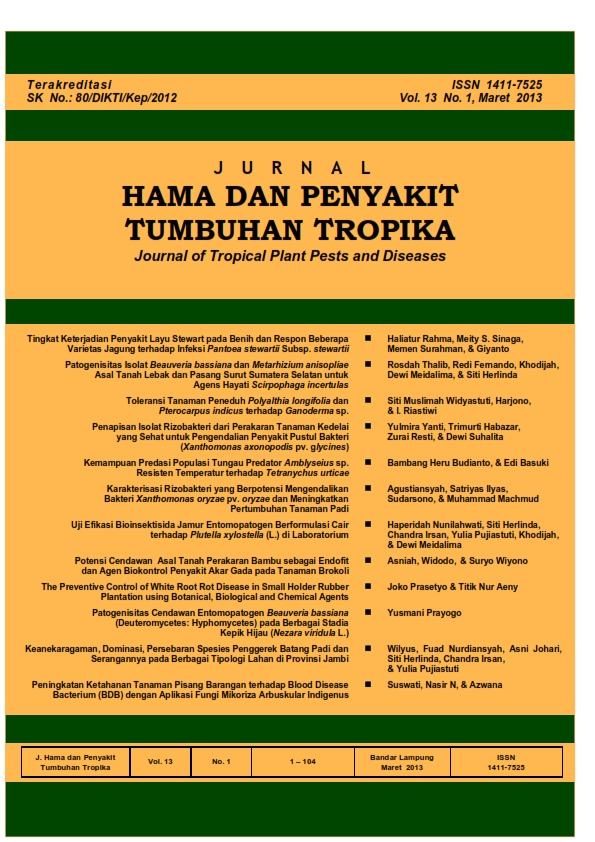