THE EFFECTIVENESS OF POLAR AND NON POLAR FRACTIONS OF AGERATUM CONYZOIDES L. TO CONTROL PEANUT RUST DISEASE AND PHYTOCHEMICAL SCREENINGS OF SECONDARY METABOLITES

The effectiveness of polar and non-polar fractions of Ageratum conyzoides L. to control peanut rust disease and phytochemical screenings of secondary metabolites.  Peanut rust disease caused by Puccinia arachidis is one of the important diseases which causes yield loss more than 50%. An alternative control which is more environmentally friendly can be conducted by applying botanical fungicides extracted from weeds. This study aimed to obtain effective concentrations of polar and non-polar fractions of roots, leaves, and flowers of Ageratum conyzoides as well as to investigate secondary metabolites in each extract. A spore germination test was conducted to determine the effectiveness of each extract. An application of 5% polar fraction of the leaves resulted 98±2% ungerminate spores which was not different with the application of 5% polar fraction of the roots which resulted 95±2% ungerminate spores. The use of a polar solvent extracted more diverse secondary metabolites compared with that of a non-polar solvent. Phytochemical screening tests on the three extracts showed that the leaf polar fraction contained more diverse secondary metabolites as compared with the others. The polar fraction of the leaves contained alkaloids, flavonoids, tannins, saponins, and terpenoids. A further test to confirm the existence as well as to separate these compounds with thin layer chromatography showed that alkaloids, flavonoids, saponins, and terpenoids separated into 7, 9, 6, and 8 spots, respectively. These secondary metabolites may be responsible to inhibit the spore germination of P. arachidis. 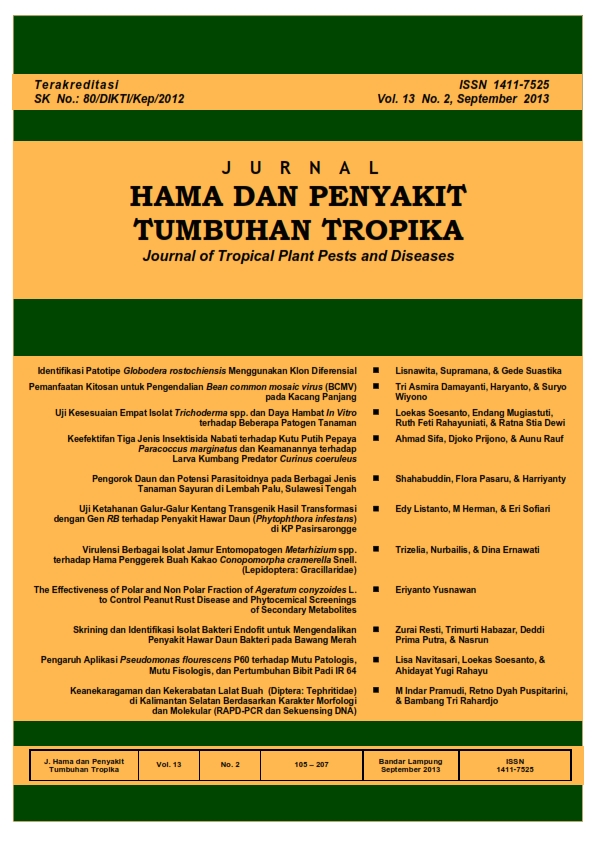