Blast disease is one of the important diseases in rice plants besides tungro disease. Originally blast disease in Indonesia was found in upland rice, but now it has also been found in lowland rice (Zulaika et al., 2018). This disease, which is able to reduce a great deal of yields, is caused by the pathogenic fungus Pyricularia grisae. Blast generates two typical symptoms, namely leaf blast and neck blast. The leaf blast is in blackish brown spots, rhombic-shaped, with white spots in the center. Meanwhile the neck blast is in the form of blackish brown spots at the base of the neck which can result in panicle neck unable to support panicles and broken. Neck blast disease is one of the main causes of rice yield loss (Hao et al., 2011). Plants infected by blast disease in the vegetative phase, most likely will experience infection in the panicle neck through transmission from leaf to panicle neck (Ghatak et al., 2013).

The occurrence of neck blast disease begins with the attachment of the fungus spore Pyricularia grisea Sacc. on the surface of the plant, in this case the panicle neck. Then the spores germinate. After that it is followed by the development of the sprout tube and the formation of the apresorium which then penetrate into the plant tissue (Galhano & Talbot, 2011). The process of penetrating appressoria of P. oryzae on hard cell walls requires high turgor pressure and there is a correlation between turgor pressure resulting in appressoria and its ability to penetrate plant membranes (Dewi et al., 2013).

Besides being found in rice plants, this pathogen is also found in other cereal crops such as wheat, sorghum and more than 40 species of Graminae (Ou, 1985). The yield loss that has been reported due to blast disease varies depending on location, cultivated varieties, planting season and cultivation techniques (Sudir et al., 2014).

It is estimated that yield loss due to blast disease every year reaches 10-30% of rice production worldwide (Skamnioti & Gurr, 2009). The results obtained by Maheshwari & Sharma (2013) showed that yield loss varies from 25.21 to 45.52% depending on location.

Based on this, a study was conducted to see the effect of neck blast disease on the decrease in grain production and quality in several high yielding varieties of lowland rice.

Research Site. The high yielding rice varieties used in this study were Inpari 4, Inpari 7, Inpari 8, Inpari 9, and Ciherang. Inpari 4, Inpari 7, Inpari 8, and Inpari 9 varieties are high yielding potential varieties, while Ciherang is an existing variety which is frequently infected by blast disease in the field. The study was conducted in Sidey District of Manokwari Regency from March to July 2015. Sidey District is one of the locations whose fields are frequently infected by blast disease. The study was carried out on a farm area of 0.75 ha. The rice planting system used in this study was Legowo 6: 1 with 20 x 20 x 40 cm of planting space (without inserted plants). This way of planting gets a plant population of 30 clumps per 1.4 m² (214,285 clumps/ha). The area of embankment in the rice fields where the research was carried out was 700 m² in 1 ha (7%) so the number of clumps/ha corrected was 199,285.

NP = Number of tillers that produce panicles per clump,

PI = The number of tillers with panicles infected by neck blast disease per clump.

Panicle Blast Severity/PBS. The panicle blast severity was observed when rice panicles entered the physiological mature phase (± 7 days before harvest). There were 30-panicle samples (1 panicle per clump) from the healthy and the sick panicle group that were was taken randomly to measure of panicle blast severity.

The panicle blast severity is based on each scale of the disease in each panicle affected by IRRI (2013) with the following formula:

Data Analysis . Data of grain size from healthy and sick panicles were compared using the t test, while data on Disease Incidents in the Necks (DIN) and Panicle Blast Severity (PBS) were analyzed using ANOVA with the SPSS program. Post Hoc tests were conducted with Duncan’s at a level of accuracy of 95% if there were significant differences in the treatment tested.

The high rate of blast disease is due to susceptible varieties and or the emergence of new generations and races of blast disease (Khan et al., 2014). In addition, this disease can be contracted from seeds originating from previous plantings that are infected by blast disease (Faivre-Rampant et al., 2013). Climate conditions also have a major effect on the presence, development and pathogenicity in the field (Koutroubas et al., 2009).

The results of t-test analysis of the effect of neck blast disease on the number of empty grains, weight of 1000 grains, and grain weight per panicle of each test variety showed a significant difference between the healthy panicle group and neck-blast-infected panicle group (Table 3 - Table 5).

The number of filled grain per panicle, the number of empty grains per panicle, and the weight of 1000 grains are indicators in predicting the productivity of a variety besides the number of productive tillers. Panicles infected by neck blast disease had higher number of empty grains per panicle and lower weight of 1000 grains than healthy panicles in all varieties, and based on t-test results it was found that all of these components had significantly different values between healthy panicles and neck-blast-infected panicles in all test varieties.

Ciherang and Inpari 8 varieties infected by neck blast with higher values in DIN panicle blast severity had a percentage of empty grain in sick panicles of 40.22% and 44.55% respectively and were higher compared to other varieties. Likewise, in Inpari 4 and Inpari 7 varieties with lower values in DIN and severity, they also had a lower percentage of empty grain in sick panicles of 30.27% and 26.72% respectively. These results indicate that the higher the rate of neck blast disease, the higher the number of empty grain in panicles. According to Wicaksono et al. (2017), symptoms of blast disease in the stem and panicle can inhibit or stop the flow of plant photosynthates. The results obtained by Singh et al., (2013) showed that if there is a blast infection in the panicle of 100%, the empty grain will increase by 17.53%, the weight of 1000 grain seeds will be reduced by 23.88% and the weight of 100 panicle yields will be reduced by 37.52%.

The quality of grain produced from plants infected by neck blast disease experienced a decrease in the size of the width of the grain and showed a significant difference between the grain from the healthy panicle group and that from neck-blast-infected panicle group in all test varieties (Table 6).

Blast causes a negative effect on grain water content at harvest. At some severity rates, blast disease can cause prematurity in mature and dry grain. In these conditions the rate grain filling varies from empty to half-filled grain. This situation can affect the quality of rice from the mill. Consequently, it can reduce the head rice percentage and increase broken rice (Candole et al., 2000).

The healthier the panicle, the more the seed filling will have an impact on the width of the grain. Therefore, neck blast disease has no effect on the length grain but will affect the width of grain. Grain from healthy panicles has a wider size compared to blast-infected panicles.

Effect of Neck Blast Disease on Harvest. The productivity of milled dry grain (GKG) in each variety was estimated based on production components (number of clumps/ha, number of panicles/clump, number of grains/panicle, % of filled grains/panicle, and weight of 1000 grains) between healthy panicles and neck-blast-infected panicles (Table 7). If all plants are assumed to be in the healthy category, then productivity can reach 8.3-10.3 tons/ha. However, if it is assumed that all plants are infected by neck blast disease, the productivity is between 4.3-6.6 tons/ha.

Productivity in the healthy plant group was higher than the productivity in the sick plant group and differed significantly. According to Mousanejad et al. (2010), the area of the blast disease on the leaves and the index value of the area of the blast disease correlate closely with the yield loss. The highest estimated productivity was Inpari 4 variety by 10.378 kg/ha in the healthy panicle group and experienced a decrease in production by 35.86% when grouped into plants infected by neck blast disease. The lowest productivity was in Ciherang variety at 8.367 kg/ha for healthy plant group and experienced a decrease in production by 48.37% for neck-blast-infected plant group. Neck blast disease in rice plants does not cause 100% yield loss, because the process of grain filling in panicles is still occurring even though it is not optimal, as is the case with healthy panicles (Subiadi et al., 2016).

Our thanks go to the Agriculture Research and Development Agency of the Ministry of Agriculture for the funding assistance through the DIPA of the West Papua Assessment Institute for Agricultural Technology to carry out this research to completion. We also express our gratitude to those who have helped in the field data collection to completion. 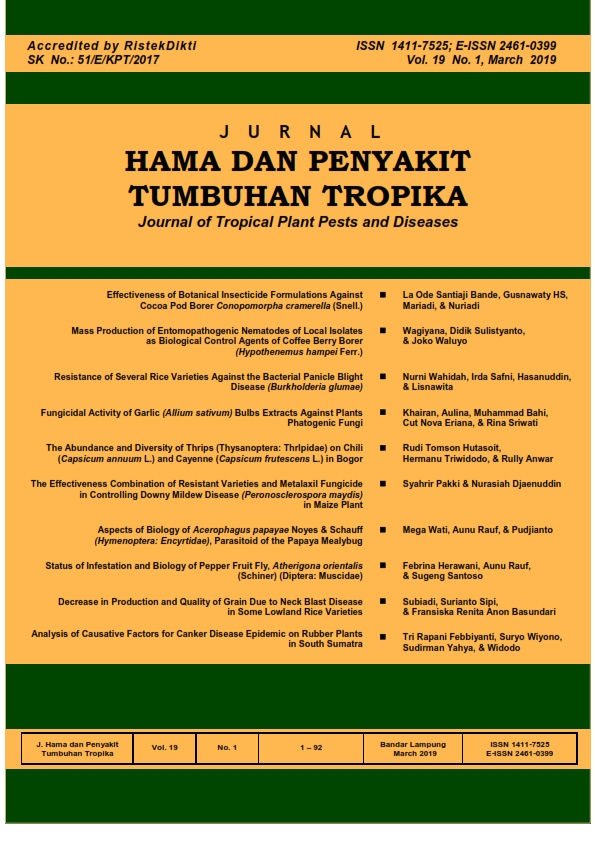