Preliminary study on Eublemma sp. (Eublemminae): a Lepidopteran predator of Coccus viridis (Hemiptera: Coccidae) on coffee plants in Bandarlampung, Indonesia. The objectives of this study were 1) to identify a Lepidopteran predator of the soft green scale Coccus viridis and 2) to present preliminary data on the predator’s feeding rate. Some coffee leaves where eggs of the Lepidopteran predator have been laid in C. viridis colonies were taken from the field and observed in the laboratory. The predator’s growth and development was noted and the specimens were identified up to generic level based on the caterpillar morphology. Ten coffee leaves each with certain number of C. viridis were also collected from the field, transferred to the laboratory, and each was inoculated with one starved caterpillar that had just formed its protective casing. The number of surviving C. viridis was counted daily. This study reveals that the caterpillar, identified as Eublemma sp. Is found to feed obligately on C. viridis. The predation rate of Eublemma sp. in laboratory is 97 + 11 scales / caterpillar. 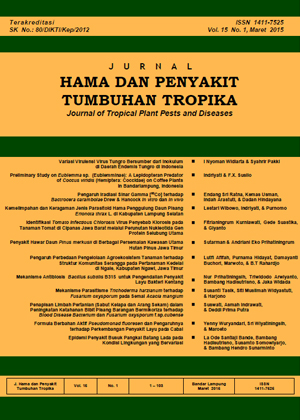