Aloe (Aloe vera L. Webb) planted in West Borneo peat land is well known to have the best product quality in Indonesia. Bacterial soft rot is one of the constraints on aloe cultivation on peat land.  Many methods have not given significant result for controlling this disease.  The research objectives were to study the application of PGPF and its combination with Pseudomonas putida Pf-20 for controlling aloe bacterial soft rot on peat land.  In vitro test showed that two isolates of PGPF tested had different respons when combining with P. putida Pf-20.  The bacterial P. putida Pf-20 inhibit the growth of PGPF SNTH003 (Aspergillus sp.) as 20.14% on King’s B and 7.48% on PDA, whereas SNTH001 (Penicillium sp.) as 62.4% on King’s B dan 34.39% on PDA.  Glass house trial showed that root dipping in P. putida Pf-20 suspension could not promote the growth of aloe, but could reduce the disease intensity.  The single application of SNTH001 and SNTH003 isolates were able to increase the growth of aloe compare with its combination each of PGPF isolates with P. putida Pf-20.  Single application of SNTH003, SNTH001 and P. putida Pf-20 was able to reduce the disease intensity of bacterial soft rot, but the capability decreased when each of PGPF combined with P. putida Pf-20.  However combination between SNTH003 and P. putida Pf-20 increased that disease intensity. The lowest disease intensty (25%) obtained by using  SNTH001 isolate. 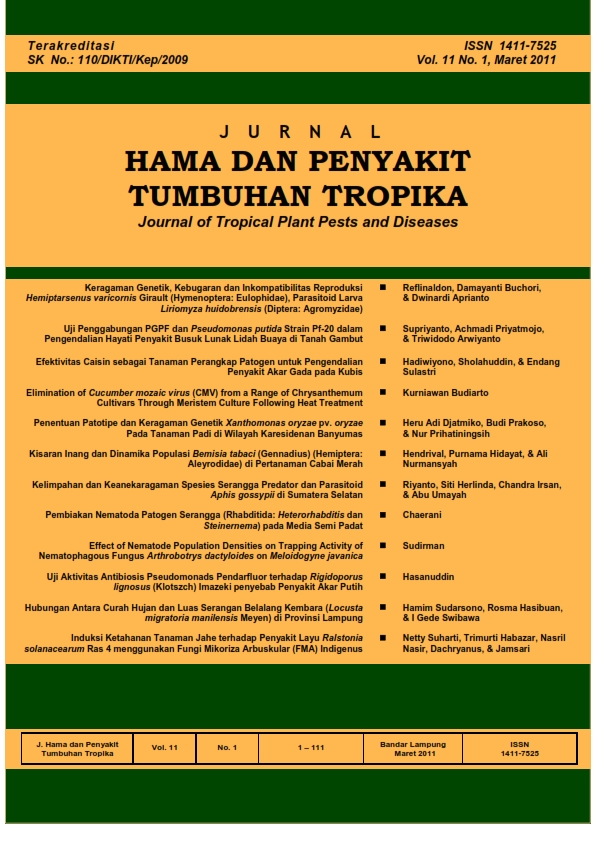