Field Screening of Pseudomonad Fluorescent for Controlling Tobacco Lincat Disease. Lincat disease is one of many factors which decreases  tobacco production in Temanggung. The disease was caused by a combination between Ralstonia solanacearum and Meloidogyne incognita. The disease is difficult to control by any available control measures. The objective of this research was to find fluorescent pseudomonads which could suppress the lincat disease. The bacteria were isolated from local plants and tested in the field directly without any prior tests in the laboratory. The results indicated that dipping root system of tobacco for 20 minutes in the suspension of fluorescent pseudomonad suppressed lincat disease in the field. The results  showed that there were variation in disease index between treatments. Plot treated with isolate  pf22, pf23, pf30, pf42, pf51, and pf 83 showed the disease index of 16,67%; 13,34%; 20%; 20%; 16,67%; and 6,67%, respectively. However, there was an inconsistency in the capability of the isolates in the disease suppression. At the second experiment, the  plants  treated with pf83 isolate showed the disease index of 36,6% with  the control plot of 63,3%. Laboratory tests indicated that there were 44 isolates which could inhibit pathogen growth in vitro. The fluorescent pseudomonads used in this experiments were proved not to belong to plant pathogenic bacteria. 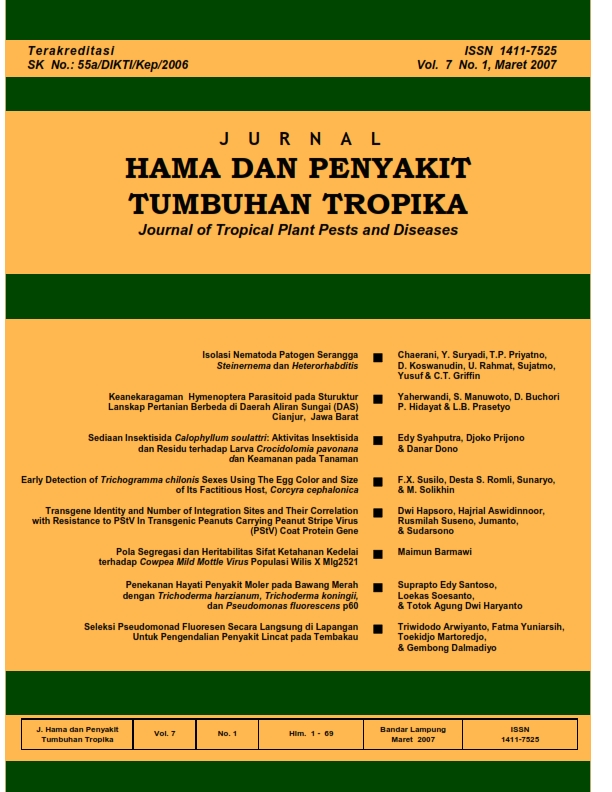