Sublethal dose effect of imidacloprid on the survival of brown planthoppers on resistant and susceptible rice varieties.Â Imidacloprid insecticides and resistant rice varieties are commonly used to control the the rice brown planthopper (BPH)Â Nilaparvata lugens in the field. The aim of this research was to evaluate the resistance of N. lugens to imidacloprid and the influence of sublethal dose of the insecticide applied to a certain resistant rice varieties on the survival of BPH. The experiment was conducted in a greenhouse trial at Indonesian Center for Rice Research, Sukamandi, West Java. Each pair of adult BPH were infested on three rice varieties Ciherang, Inpari 13, and Pelita, and then followed by spraying five doses of imidacloprid. The the effective dose rate of imidacloprid on BPH was determined by the value of LD95 compared with the recommended dose (20 g a.i. ha-1). The nymphal survival was concidered as a result of the applied sublethal doses. The numbers of nymphal progenies were observed until two peaks populations of both first and second generations. The insecticide then was applied at LD50 dose equivalent on adult BPH of the second generation. The number of laid eggs and the abnormal egg shapes were counted. Imidacloprid doses that were unefffective against BPH showed by the values of LD95 were 1224.3, 2799.0, dan 4692.8 g a.i. ha-1 at Ciherang, Inpari 13 dan Pelita rice varieties, respectively. Seven days after application of imidacoprid, about 70-90% of adult BPH still survived. Sublethal dosages of imidacloprid tended to increase the survival of BPH on a resistant rice variety of Inpari 13, as reflected by the number of nymphal progeny of 156-169 BPH/plant at the first population peak. Imidacloprid treatment increased the number of laid egg, but had no effect on the egg sterility. 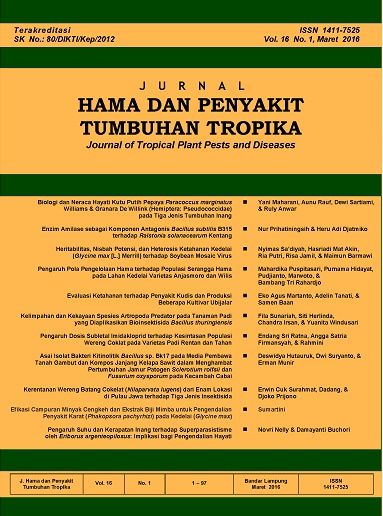 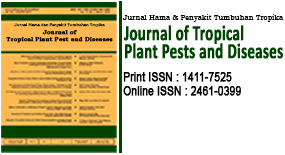