Peanut somaclonal variants resistant to Sclerotium rolfsii derived from in vitro selection with fungal culture filtrates. Sclerotium stem rot is one of the most important peanut disease which often caused significant yield loss.  The use of peanut cultivars resistant to Sclerotium rolfsii infection is the most efficient way to control the disease.  Attempts to obtain peanut lines with tolerance or resistance to Sclerotium stem rot through induction of somaclonal variation and in vitro selection using fungal culture filtrates (CF) have been conducted previously. Somatic embryo (SE) clumps that had been maitained in culture for approximately one year in regeneration medium were exposed onto selective medium containing 30% S. rolfsii CF for three consecutive 1 month –passages, and the SE formed after selection periods were considered to be insensitive to the fungal CF. A number R0 peanut lines have been regenerated from CF-insensitive SE, and their R1 and R2 progenies were grown in a plastic house for evaluation on qualitative and quantitative variant characters.  Early identification for tolerance to S. rolfsii was also conducted among R0 peanut lines, and the results have shown enhanced resistance when compared to the original non-selected cultivar.  However, further evaluation is needed to study responses of the R1 and R2 progenies of the somaclones against S. rolfsii infection.  The objective of this particular study was to evaluate responses of R1 and R2 peanut somaclones derived from fungal CF-insensitif SE against S. rolfsii infection in the plastic house.  Results of this experiment showed, a number of resistant somaclonal variants were obtained among R1 and R2 population, which segregated as resistance and susceptible to S. rolfsii infection.  The resistance somaclonal variants initially showed stem rot symptoms after inoculation with S. rolfsii with disease score (DS) of 1 to 3.  However, as the plants grew and developed, they showed wound-healing process at the lesio and they were able to produce the same or higher number of filled pod as the original non-inoculated peanut plants. 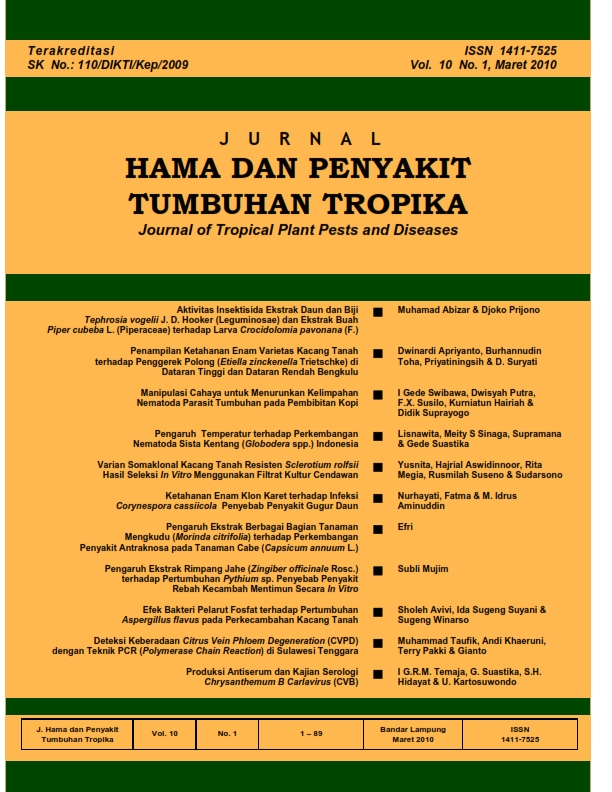