Biology and Transformation of the Migratory Locust Locusta migratoria manilensis Meyen (Orthoptera: Acrididae) at Several Laboratory Population Density Levels.  The migratory locust, Locusta migratoria manilensis Meyen (Orthoptera: Acrididae) is one of insect pests in Indonesia that undergoes a unique polymorphic biology.  The locust develops a transformation phase which is triggered mainly by high population density.  Its recent outbreaks in several regions of Indonesia cause major concern and control strategies must be developed to strengthen control efforts in the future. Its unique polymorphic phenomenon, therefore, must be investigated thoroughly for the basis of management of the outbreak.  Due to its agility and its long range flying ability, the most realistic technique to study behavioral and morphological change of the locust is in controlled condition at a laboratory or a green house facility. The experiment was aimed to study effects of colony densities on the biology and transformation process of the migratory locust.  More specifically, the experiment was to study effects of population density on the feeding activity, mortality rate, and the ratio of F/C and E/F of the migratory locust L. migratoria manilensis.  The population densities were simulated in colonies at 2, 5, 10, 20, dan 30 couples per cage (cage size: 45x45x90 cm) reared in a green house. Results of the experiment show that, in general, higher densities of the migratory locust colonies tended to feed more rigorously than those of the less dense colonies.  The locust remained in solitary phase at the density of 2-5 couples per cage whereas the transient phase occured at the density of 10-20 couples per cage.  The colonies transformed to gregarious stage when their densities were 30 couples per cage or higher.  Mortality percentage tended to be higher at colonies with higher density, especially for the third instar of the migratory locust. 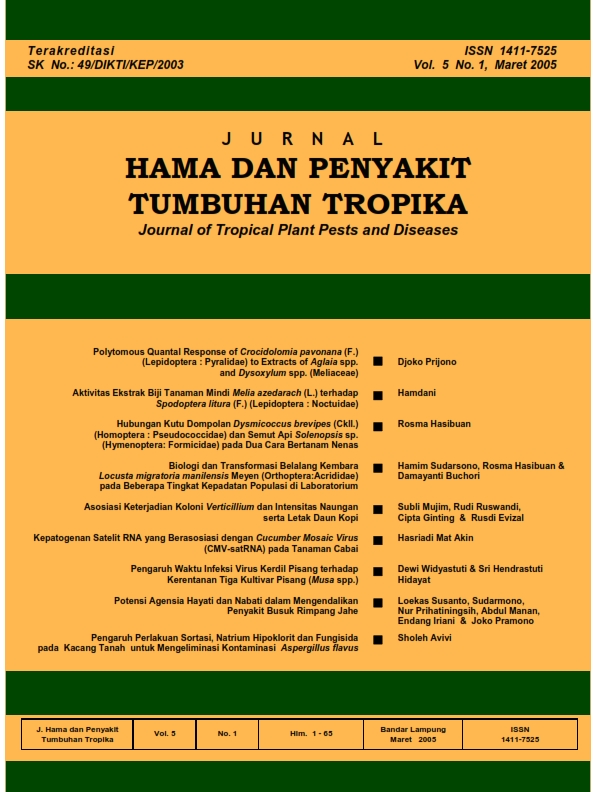